There are several ways that Alaskan geographical and culture regions are defined. There are three broad major geographical regions. 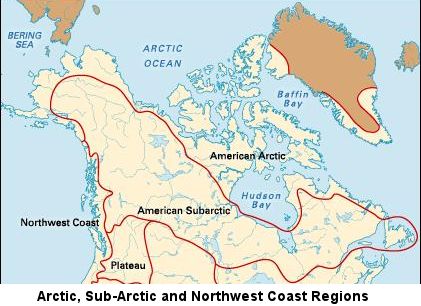 The Arctic, or circumpolar, peoples are the indigenous inhabitants of the northernmost regions of the world. For the most part, they live beyond the climatic limits of agriculture, drawing a subsistence from hunting, trapping, and fishing or from pastoralism.

Thus climatic gradients rather than simple latitude determines the effective boundaries of the circumpolar region, and these gradients have their counterparts in the major environmental transitions. Of these transitions, the most important is the tree line, which marks the northern margin of the coniferous forest, or taiga.

The earliest inhabitants of North America's central and eastern Arctic are referred to as the Arctic small tool tradition (AST) and existed c. 2500 BC. It consisted of several Paleo-Eskimo cultures, including the Independence cultures and Pre-Dorset culture.

The Dorset culture (Inuktitut: Tuniit or Tunit) refers to the next inhabitants of central and eastern Arctic. The Dorset culture evolved because of technological and economic changes during the period of 1050–550 BC. With the exception of the Quebec/Labrador peninsula, the Dorset culture vanished around 1500 AD.

Supported by genetic testing, evidence shows that Dorset culture, known as the Sadlermiut, survived in Aivilik, Southampton and Coats Islands, until the beginning of the 20th century.

Dorset/Thule culture transition dates around the 9th–10th centuries. Scientists theorize that there may have been cross-contact of the two cultures with sharing of technology, such as fashioning harpoon heads, or the Thule may have found Dorset remnants and adapted their ways with the predecessor culture. Others believe the Thule displaced the Dorset.

By 1300, the Inuit, present-day Arctic inhabitants and descendants of Thule culture, had settled in west Greenland, and moved into east Greenland over the following century. Over time, the Inuit have migrated throughout the Arctic regions of Canada, Greenland, Russia and the United States.

Other Alaskan Native cultures still living in the Arctic Region include the Buryat, Chukchi, Evenks, Inupiat, Khanty, Koryaks, Nenets, Sami, Yukaghir, and Yupik, who still refer to themselves as Eskimo which means "snowshoe netters", not "raw meat eaters" as it is sometimes mistakenly translated.

Indigenous peoples of the Arctic include:

Peoples of subarctic Siberia and Greenland are sometimes included in the subarctic; however, Greenlandic Inuit are usually classified as Indigenous peoples of the Arctic.

Native subarctic peoples have over 30 languages, falling into two major language families: Algonquian and Athapaskan. Algonquian peoples tend to live in the east, while Athapaskan peoples live more in the west.

Indigenous people of the sub-arctic include: 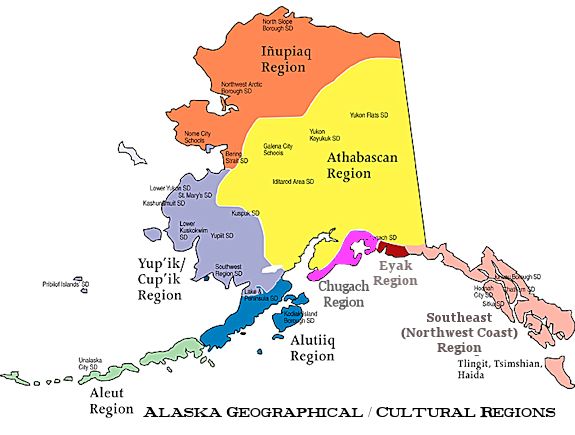 These regions are also commonly referred to by their Census Area designation, also called Boroughs.

The Aleut Culture Area includes the Aleutian Islands and the nearby Alaska Peninsula at the Southern edge of Alaska. The term “Aleut” was introduced by Russians and comes originally from the Koryak or Chukchi languages of Siberia. Aleut comes from the Russian word Aleuty.

Based in Sand Point, the Aleutians East Borough comprises the westernmost portion of the Alaska Peninsula, and a number of Aleutian islands.

The Aleutian Islands (possibly from Chukchi aliat, meaning “island”) are a chain of small islands situated in the Northern Pacific Ocean, and extending about 1,200 miles westward from the extremity of the Alaskan peninsula toward the peninsula of Kamchatka.

The people refer to themselves as Ungangan, and have been called “Aleut.” The Aleut language is related most closely to Eskimo languages.