The Athabascan Culture Area, also known as the “Interior” of Alaska, runs from south of the Brooks Mountain Range down to the Kenai Peninsula. The Athabascans  of Alaska traditionally lived along five Alaskan rivers: the Yukon, the Tanana, the Susitna, the Kuskokwim, and the Copper River. 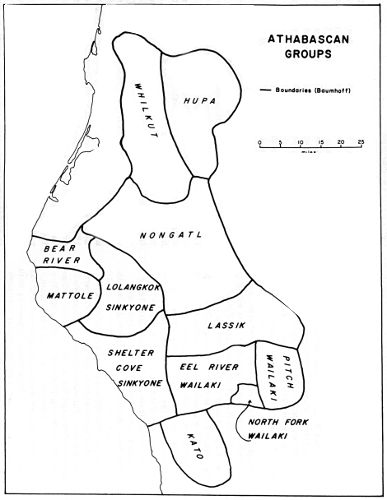 The Athabascans have a matrilineal system in which children belong to the mother’s clan, with the exception of the Holikachuk and the Deg Hit’an.

Traditional nomadic hunting groups are part of a kin-based network in which they are expected to follow traditional customs for sharing in the community. A hunting group is usually comprised of 20-40 people from two families.

Often the core of this traditional group was a woman and her brother. The brother and his sister’s husband often became hunting partners for life. Sometimes these hunting partnerships started when a couple married.

In traditional families, the mother’s brother takes social responsibility for training and socializing his sister’s children so that the children grow up knowing their clan history and customs.

Endurance and physical strength were prized among the Athabascan Indians, and game was often run down on foot. Athabascans harvested salmon and hunted rabbits, caribou, and bear with the help of snares, clubs, spears, and bows and arrows. Periods of famine were common.

Because they were seminomadic and hunted on foot, footwear was very important, and the Athabascans designed light and flexible snowshoes made of birch and rawhide. The Athabascans used birch bark from the interior forests to make canoes, containers, sleds, and cradles.

Clothing was made of animal hides, decorated with porcupine quills colored with natural dyes. Some Athabascan groups inhabited permanent winter villages and summer fishing camps. Most bands consisted of a few nuclear families and had limited internal organization. Leadership was acquired by warriors or hunters.

There are eleven different Athabascan languages in Alaska, many others in Canada, some in California and Oregon, and the Navajo and Apache languages in the Southwestern United States. The Athabaskan people call themselves ‘Dena,’ or ‘the people.’

Within each of the eleven Alaskan Athabascan language groups there are local dialects, and in the past each dialect corresponded with a social and geographical unit called a “regional band,” made up of from 30 to 100 nuclear families. (A nuclear family is a unit consisting of parents and their still dependant children.)

The animistic belief system was common to all Alaskan Athabascan groups. All creatures, and some inanimate objects, had spirits which were active and powerful components of those creatures.

The spirits enabled an animal to know more than was immediately apparent to him. Thus, if human beings did something which displeased the animal’s spirit, the animal itself would remain aloof from the people, and the people might starve.

There were very definite rules which people had to follow in dealing with animals based on this belief in animal spirits. The specific rules differed from area to area, but the general concept was the same.

Athabascans gave potlatches to mark a death and celebrate a child’s first successful hunt, as a prelude to marriage. Potlatches are a type of ceremony in which you  give away, destroy, or invite guests to consume all of your food and possessions. This was referred to as “paying off” the guests who had performed ritual services or provided support in the past.

Those who received goods at one potlatch would typically reciprocate by inviting their former hosts to their own potlatch at a later date; such invitations would confirm their relative levels of prestige and status.

Other important features of the potlatch were the recitation of family histories and bloodlines, transfer of ceremonial titles and possessions, and offerings to ancestors. Those who aspired to leadership were expected to host memorable potlatches, at which the would-be leader would give away all his possessions then prove his prowess by providing for himself and his family for an entire year without outside help.