The Aleut Culture Area includes the Aleutian Islands and the nearby Alaska Peninsula at the Southern edge of Alaska. The term “Aleut” was introduced by Russians and comes originally from the Koryak or Chukchi languages of Siberia. Aleut comes from the Russian word Aleuty. 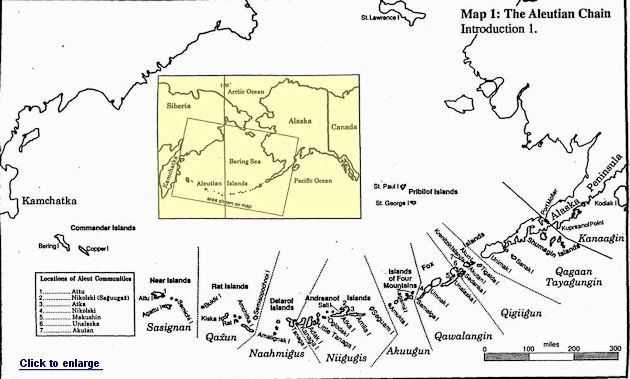 Aleut homelands include the Aleutian Islands, the Pribilof Islands, the Shumagin Islands, and the far western part of the Alaska Peninsula. The natural marine environment defines subsistence lifestyles and cultures that date back more than 8,000 years.

The Aleuts and the Alutiiq differ in language and culture but a commonality was created from the first contact with the Russians in the 18th century that is evident today.

Aleut settlements were, as a rule, located on bays where there was a good gravel beach for landing skin-covered watercraft. Village locations on necks between two bays were preferred because such locations provided at least one protected landing for any given wind direction and served as an escape route in the event of enemy attack.

A good supply of fresh water nearby was a necessity, and a good salmon stream was indispensable.

Other considerations were availability of driftwood and access to stone materials suitable for tool and weapon making and mineral paints, sea mammal hauling grounds, and an elevated lookout post from which one could watch for enemies and whales.

Aleut society was ranked, with hereditary classes of high nobles, commoners, and slaves. The leaders were recruited from the high nobles or the chiefly elite. This ranking was reflected in allocation of living space within the longhouse and in burials.

At sea, Aleut men wore wooden hunting hats. The shape of the headgear indicated a man’s rank; a short visor was worn by the young and inexperienced hunters, an elongated visor by the rank-and-file, and open-crown long-visored hats by important mature men.

The “east” and the “above” were the sacred dimensions associated with the creator,  Agugux. At dawn Aleut men emerged on the rooftops of their houses and faced the east to greet the day and “swallow light.”

After the arrival of missionaries in the late 18th century, many Aleuts became Christian by joining the Russian Orthodox Church. One of the earliest Christian martyrs in North America was Saint Peter the Aleut.

In the 18th century, Russian furriers established settlements on the islands and exploited the Aleut people for labor. There was a recorded revolt against Russian workers in Amchitka in 1784. It started from the exhaustion of necessities that the Russians provided to local people in return for furs.

In 1811, in order to obtain more of the now commercially valuable otter pelts, a party of Aleut hunters traveled to the coastal island of San Nicolas, near the Alta California-Baja California border.

The locally resident Nicoleño nation sought a payment from the Aleut hunters for the large number of otters being killed in the area.

Disagreement arose, turning violent; and in the ensuing battle nearly all Nicoleño men were killed. This, along with European diseases, so impacted the Nicoleños, that by 1853, only one living Nicoleña person remained.

Prior to major influences from foreigners, there were approximately 25,000 Aleuts on the archipelago. Barbarities by outside corporations and foreign diseases soon reduced the population to less than one-tenth this number.

The 1910 Census showed 1,491 Aleuts. In the 2000 Census, 11,941 people reported they were of Aleut ancestry; nearly 17,000 said Aleuts were among their ancestors. Alaskans generally recognize the Russian occupation left no full-blooded Aleuts.

When Alaska Natives enrolled in their regional corporations under the terms of the Alaska Native Claims Settlement Act of 1971 (ANCSA), the Aleut Corporation attracted only about 2,000 enrollees who could prove a blood quantum of 1/4 or more Alaska Native (including Aleut).