Bristol Bay Borough is located in Southwest Alaska, at the upper eastern end of Bristol Bay, also known as Iilgayaq Bay. The Katmai National Park is adjacent to the Borough. The community is located in the Kvichak Recording District.The region was first settled by Athabascan Indians, Central Yup’ik Eskimos and Sugpiaq (Aleut-Russian) Eskimos. 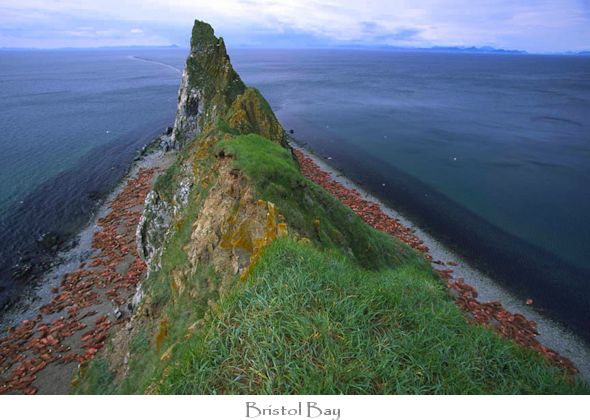 Hunting and fishing camps along the Naknek River date from 3,000 to 4,000 B.C. In 1818, the first Russian traders arrived. Two years later, the first Russian settlement was established, and in 1841, the Russian Orthodox Mission was built at Nushagak.

Bristol Bay is one of sixteen organized boroughs in Alaska. Its borough seat is Naknek. As of the 2000 census, the borough’s population was 1,258.

The Russians explored and maintained dominance of the area until the U.S. purchase of Alaska in 1867. U.S. interests were directed primarily at the fur and fishery potential of the region. In 1883, the first salmon cannery in Bristol Bay was opened.

In 1890, the first cannery on the Naknek River was opened. Commercial salmon remain the region’s primary industry. During World War II, King Salmon Air Force Base was developed. The Bristol Bay Borough was incorporated as the state’s first borough in 1962.

King Salmon is located on the north bank of the Naknek River, about 15 miles up river from Naknek. The two communities are connected by the Alaska Peninsula Highway. King Salmon is the regional transportation center, with many airline flights in and out daily.
At the beginning of World War II, the U.S. government constructed an air force base in King Salmon. The base was maintained throughout the war by the Federal Aviation Administration (FAA). The base was closed in 1994. In 1949, the U.S. Army Corps of Engineers built the road connecting King Salmon to Naknek. A U.S. post office was established in King Salmon the same year. Other developments that occurred around that time included the construction of the Alaska Department of Fish and Game quarters, a weather bureau office, and expansion of the FAA.

Naknek is located on the north bank of the Naknek River. In 1890, the first cannery opened on the Naknek River. By 1900, there were approximately 12 canneries in Bristol Bay. The Homestead Act enabled canneries to acquire land for their plants and also make land available to other institutions and individuals. The parcel owned by the Russian Orthodox Church on the north side of the Naknek River was the first land recorded in Naknek. Squatters built shelters on the church property and were eventually sold lots in what became the center of Naknek. A U.S. post office was established in 1907. Naknek has developed over the years as a major Alaska fishery center and center of local government.

South Naknek is located on the south bank of the Naknek River. It is a more traditional Alaskan community. It is not connected to the other communities by road, except for a few months when vehicle travel is possible via the winter trail across the frozen Naknek River.
A Native village of Qinuyana was once located on the site where it developed. Many of the villagers came to South Naknek from the villages of New and Old Savanoski. Old Savanoski is located near the “Valley of Ten Thousand Smokes.” It was abandoned after the 1912 Katmai volcanic eruption.

While these three CDPs do not cover the borough’s entire land mass, they do contain 100 percent of the borough’s population, according to the 2010 Census.

Bristol Bay Borough is known as the “Red Salmon Capital of the World” as well as the “Gateway to Katmai National Park and Preserve.” It is located in Southwestern Alaska at the head of Kvichak (KWEE-jak) Bay, an arm of the larger Bristol Bay.

The main feature of the borough’s setting is the Naknek River and the cliffs bordering Kvichak Bay. At Naknek and South Naknek, where the cliffs are at their highest and the river is at its widest, the combination of the broad tidal river and the brown cliffs with their crowning greenery, present a truly striking picture. Looking across the river from one community to the other, the towns appear dwarfed by the cliffs on which they are situated.