The Native Village of Deering is a member of the NANA Regional Corporation. In Iñupiaq, the village is called Ipnatchiaq.

Language: Iñupiaq, the indigenous language, is part of the Eskimo-Aleut language family, and Malimiut is one name for the dialect traditionally spoken in Deering.

Deering is situated at the mouth of the Inmachuk River, on the north side of the Seward Peninsula, and is approximately 60 air miles from the regional hub, Kotzebue. Deering is on a sand and gravel spit just 7 feet above sea level. It lies on a flat gravel spit 300 feet wide and a half-mile long.

When gold was discovered in the river drainage, miners set up a mining camp not far from the traditional Iñupiat settlement. Capitalizing on the opportunity, the community formed a supply station, selling supplies to would-be miners.

Mining affected the character of the area, however, and is not to everyone’s liking. In response to the influx of miners, and their effect on the community and its resources, missionaries moved the original school – along with 2/3 of the population – to establish Noorvik in 1914, though many families eventually returned. Some say it was because they craved seal oil.

Reindeer herding was introduced by missionaries and supported by the United States government as means to prevent starvation in lean times, and to provide occupation among local people.

Somewhat incidentally, Deering was named for a schooner, the Abbie M. Deering, which was in the area. The ship, mentioned in Rudyard Kipling’s Captains Courageous, journeyed from Brazil, through the Straits of Magellan, to San Francisco (where “Kotzebue Sound” was on everyone’s lips, and the boat changed hands) and on to the fabled gold fields of the Seward Peninsula. It joined the legion of the shipwrecked in 1903, on a reef in the Aleutians.

In 1970, the City of Deering was incorporated as a second class city, under the laws of the State of Alaska. It also has a village council, organized under the Indian Reorganization Act of 1934.

As of 2003, the village included a community hall, a clinic run by the U.S. Public Health Service, a post office, a church, two stores, and a National Guard armory.

THE INMACHUKMIUT PEOPLE OF DEERING 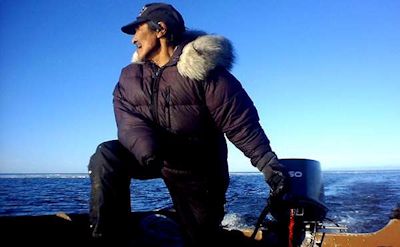 The Inmachukmiut are the people of the Inmachuk River, and are Inupiat (Inuit or Eskimo). 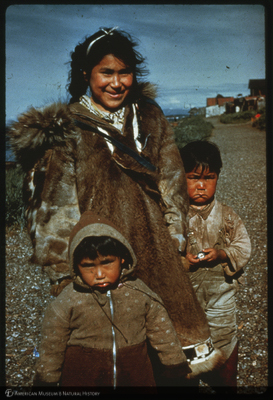 Prior to its establishment as a permanent, year-round community, the area around Deering was used and occupied by people known as the Inmachukmiut, or the people of the Inmachuk River.

When a mission school (K-8) was built at the present village site, people began staying throughout the seasons, so their children could attend. People from Kugruk Lagoon – 10km east of Deering – joined them there.

The City of Deering is a second class city, incorporated with the State of Alaska. It is one of eleven communities making up the Northwest Arctic Borough (NAB). Where traditional leadership and customs held sway since time immemorial, in 1945, the village voted to form the Native Village of Deering tribal government, under the auspices of the Indian Reorganization Act (IRA).

Situated on a spit in the Kotzebue Sound, Deering’s landscape is treeless coast and riverine drainage. The winters are long and cold, and the summers short and cool, but light, due to the “midnight sun,” Summer temperatures reach highs of around 65 degrees, and winter temperatures dip to minus 19, though wind whipping off of Kotzebue Sound will drive it lower.

Air – Accessible year-round, Deering Airport (DRG or DEE), is a public, general aviation airport, and one of 256 airports owned and maintained by State of Alaska DOT&PF, the largest aviation system in North America. It is just over a mile outside of town, and has a 3300’ long, 75’ wide, gravel-surfaced runway.

Daily passenger flights from Kotzebue cost between $260 and $324 and take about one hour, often stopping in Buckland on the way to Deering. At least two airlines (Bering Air and Era Alaska) have regularly scheduled passenger service.

Land – ATVs and snowmobiles (locally called “sno-gos,” or “snowmachines”) are the most common form of ground transportation in Deering, though there are some trucks.

The village is not connected to any other communities by rail or permanent road, though in winter there are flagged ice trails connecting Deering to Candle, Buckland, Shishmaref, Nome and Kotzebue.

Water/Marine – From its location on the coast, Deering has easy access to marine travel. In summer, small boats are used for subsistence hunting and fishing, and barges are able to reach the village.

Bulk fuel and most large items or shipments arrive in Deering via barges operated by Crowley Marine Services and Northland Services, which are able to navigate Kotzebue Sound July through mid-October.

Northland Services estimates the following costs for delivery of these sample shipments:

Water – The Inmachuk River is the source for the village’s water, and the City of Deering operates the water system. It is pumped from the river, then treated and collected in an insulated storage tank. From there, water is delivered via cart to home tanks or is hauled to homes; only the school and medical clinic have piped water. Elder’s pay $20 per 100 gallons and other residents pay $25 per 100 gallons. Commercial entities pay $.30 per gallon.

Sewer – Deering has a piped, vacuum sewer system, operated by the City of Deering. Sewage lift stations draw sewage to a city sewage lagoon. Each household pays $85 per month for the service, though that figure can change from month to month.

Solid Waste Disposal – A City of Deering-operated landfill is available for individuals to take their solid waste to. It is a Class 3, permitted landfill.

Public Safety – No local police or public safety or tribal officers are located in Deering. The village relies upon the Alaska State Troopers stationed in Kotzebue to attend to law enforcement needs. There is a holding cell at the public safety office. The Deering Volunteer Fire Department responds to local fire emergencies.

Health Services – Maniilaq Association’s Community Health Aide/Practitioner program (CHAP) operates a village health clinic in Deering, constructed in 2005. The Maniilaq Health Center, in Kotzebue, is the nearest hospital, and serves as the medical hub for the region’s clinics. Telemedicine also connects the Deering clinic to medical personnel in Anchorage, at the Alaska Native Medical Center, run by the Alaska Native Tribal Health Consortium.

CHAP operates eleven remote village clinics. Most clinics have a full time staff of two to four Health Aides who service about one-half of the total patient contacts.

As a mixed cash and subsistence economy, residents live on a combination of natural resources and cash income. People participate in a mixed economy, with a strong emphasis on traditional subsistence resource use.

A significant portion of residents’ protein is derived from moose, bearded seal (ugruk), and caribou, supplemented with other fish, beluga whales and small game.

Employers include the Native Village of Deering (tribe), the City of Deering, Maniilaq Association, the Deering School (NWABSD), NANA Regional Corporation, the United States Post Office, local stores and area airlines. Several residents work at the Red Dog Mine, located within the region. Residents also derive income from the creation and sale of arts and crafts and trapping.

Approximately 68 homes shelter Deering residents, most of which are detached, freestanding residences, with each house averaging 2.92 people each. 44.1% of these homes are owner-occupied, with a median value of $54,200. Those paying rent pay a median rent of $738/month.