Alaska natives have a unique relationship with the US Government that is different from the reservation system of the lower 48 states.There are 12 Alaska Native Regional Corporations that govern most of the 225 federally recognized indian communities and villages in Alaska. 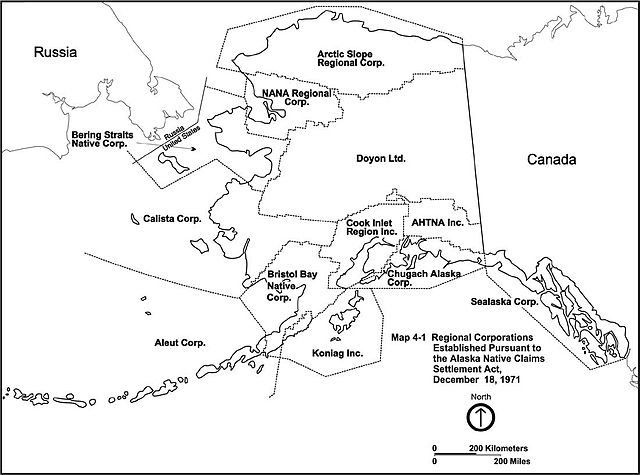 The regional corporations were created by the Alaska Native Claims Settlement Act (ANCSA), which created Native-owned corporations to provide stewardship of ancestral lands and financial and other resources for Alaska's native people.

A 13th corporation, based in Seattle, Washington, also was formed to represent Alaska Natives who do not reside in Alaska.

The regional corporations were formed to receive approximately 45 million acres of land transferred from federal to private ownership and to manage investment of 2 million appropriated by Congress as the cash part of the settlement. An exception to this is that the 13th corporation received no land.

In addition to the regional corporations, some villages have their own village corporations, and there are many tribally affiliated councils who also take leadership roles for the native communities and villages of Alaska.

Profiles of the Alaska Regional Corporations are listed below.

Ahtna, Incorporated is one of 13 Alaska Native Regional Corporations established by Congress under terms of the Alaska Native Claims Settlement Act in 1971.

The Aleut Corporation was established in 1972 under ANCSA. The corporation received a settlement of $19.5 million, and was entitled to 70,789 acres of surface lands and 1.572 million acres of subsurface estate. Voting shares of stock were issued to 3,249 shareholders.

Arctic Slope Regional Corporation (ASRC) was established pursuant to the Alaska Native Claims Settlement Act of 1971. Incorporated in 1972, ASRC has its corporate headquarters in Barrow, Alaska with administrative and subsidiary offices located in Anchorage and throughout the United States.