King Island Native Community was originally located on King Island in the Bering Straits, approximately 40 miles due south of Cape Prince of Wales and the village of Wales, or 80 miles northwest of Nome. The village site on King Island which is located on the south side facing Russia, is called Ukivok (OO-Q-Vok). In the early 1960’s, social and economic pressures and opportunities persuaded island residents to relocate to Nome. 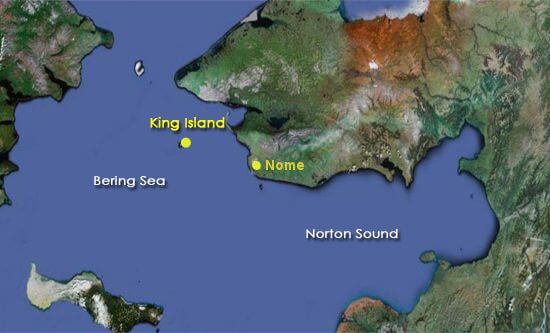 King Island is recognized as a distinct village corporation under the Alaska Native Claims Settlement Act (ANCSA), has an operative IRA Council, and conducts itself as a community organization based in Nome, Alaska. The King Island Native Corporation has 206 shareholders and owns several businesses.

King Island was located and named by Captain James Cook in 1778, although no mention is made in a history of the regions of any inhabitants on the island at that time. Photography of King Island in the late Nineteenth Century indicated a settlement of walrus-skin dwellings lashed to the face of King Island’s cliffs.

By the early Twentieth Century, King Island was reported as the winter home of 200 Eskimos, proving a good base for walrus and seal hunting.

Each summer the entire population voyaged by kayak, and umiak to the Alaskan mainland for a few months of fishing and, later, to sell traditional handicrafts. After Nome was founded, they summered near the town, where they sold intricate ivory carvings and seal skin sewing to tourists and locals.

In 1959 through the early 1960s, social and economic pressures and opportunities persuaded island residents to relocate to Nome. In Nome, King Islanders have maintained a distinct community identity.

During World War II, some of the men were drafted into the military. Tuberculosis killed some people and hospitalized others in the late 1940s and 1950s, said Deanna Kingston, lead researcher in an Oregon State University study of King Island and its former inhabitants.

In its fourth and final year, the study aims to document the history of surviving villagers, their stories, place names, burial sites, wildlife and vegetation, said Kingston, whose mother was born there.

“When people talk about the island, they say it had the best salmonberries, the greens were sweeter there, the ducks were better, the best drinking water in the world was on the island, that walrus hunting was easier,” she said. “Probably a third of the place names there all refer to getting food.”

Beginning in the 1950s, however, fewer people returned to King Island from traditional summer camping grounds just east of Nome, where there were doctors and jobs.

Most people, including Pikonganna’s family, decided to leave for good after the federal Bureau of Indian Affairs closed the village school in 1959 because of declining numbers and concerns about a potential rock-slide.

By 1966, everyone was gone. People initially moved to the camping grounds, settling in abandoned buildings and donated Quonset huts in what became known as King Island Village or East End.

Former residents visit King Island in the spring and summer months to hunt walrus, pursue other subsistence activities, and maintain dwellings, although vacant most of the year.