The village of Evansville, Alaska was settled in the late 1940s when Wilfred Evans, Sr. and his brother-in-law Frank Tobuk relocated their families to the area from Alatna, Alaska, to take advantage of the economic opportunities presented when the Federal Aviation Administration (FAA) built an airfield and communications facility. Evansville is located at the foot of the Brooks Mountain Range. 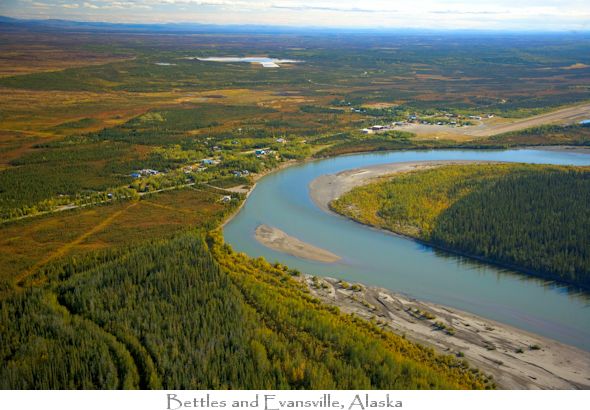 Evansville is located at the foot of the Brooks Mountain Range.

The village of Evansville, Alaska was settled in the late 1940s when Wilfred Evans, Sr. relocated his family to the area from Alatna, Alaska. Wilfred had inherited the family trading company from his father, John Evans, and was operating it in Alatna. Wilfred’s brother-in-law, Frank Tobuk also moved his family to Evansville from Alatna.

Both families relocated to take advantage of the economic opportunities presented when the Federal Aviation Administration (FAA) built an airfield and communications facility in 1948 in Bettles Field, 180 air miles North of Fairbanks, Alaska. The airfield was built for the military as the main stop over for aircraft to replenish their fuel supply when flying from Fairbanks to Barrow and as a support base during exploration for petroleum reserves.

Wilfred opened and operated a timber sawmill business in Evansville. Through his business, Wilfred and his brother-in-law, Frank helped build the Bettles Lodge.

A post office was established at the Bettles Lodge in 1950 and a school was opened in 1956.

Wilfred Evans and Frank Tobuk were descendants of the Koyukon Athabascans and Kobuk, Selawik, and Nunamiut Eskimos from the north and northwest who followed the wild game and fish in the Koyukuk River region while living in nomadic seasonal camps.

Prior to moving to Evansville, Wilfred and Frank had lived with their families in the village of Alatna, which was a primarily Kobuk Eskimo village.  Evansville represents a blending of families and native cultures, which gives the village a unique perspective on traditions and customs.

The only road access is in the winter over a snow/ice road. During the winter, the Hickel Trail leads residents to the Dalton Highway (Haul Road) which leads to Fairbanks. The Hickel is only open in the winter and is plowed through the snow over two frozen rivers and a number of frozen creeks.

Residents can get supplies over the road during the winter, so some supplies are less expensive than in other land-locked communities.

During the summer months, the Koyukuk River is extensively used but not for commercial services.

The local airport serves as a transport center with lodging, fuel, and food services. Nearby VOR Lake is also a heavily used aircraft float pond.

The economic base of Evansville and Bettles is tourism, government and air transportation. Bettles is the jumping off spot for tourists, hikers, and campers traveling to the Gates of the Arctic National Park and Preserve. There is an influx of winter visitors, mainly from Japan for Northern Lights viewing. Full-time and year-round employment is available and seasonal employment in the summer months.