Reindeer herds on the Seward Peninsula

Reindeer were first brought to Alaska by Sheldon Jackson in 1892 over concerns about the Native population facing food shortages from whaling overharvest and the disappearance of regular caribou migration. 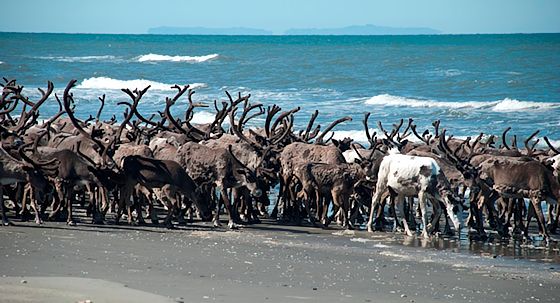 Although it has since been established that the Inupiaq communities were not in fact, on the brink of starvation as Jackson believed, the practice eventually took hold as a convergence of missionary education and vocational training.

Herding had a rocky start during its early years. First, there were problems with the Siberian herders who were brought over to train the Inupiat, and not long after, disliked missionary Harrison Thornton was murdered in Wales during the attempted establishment of a reindeer station there. Eventually however, reindeer stations were successfully established in villages around the Seward Peninsula.

Young Inupiaq men (typically from wealthier families) were recruited by superintendents to become apprentices for several years, after which point they were loaned 10 reindeer and returned home to their villages.

Over the subsequent years, these programs changed to a form of deferment system where apprentices received a few reindeer each year they were in the program, but remained under tight restrictions and were not actually allowed to own the deer they managed. The herds were officially only owned by US missionaries and Siberian herders.

In 1895, Charlie and Mary Antisarlook became the first Alaska Natives to own a herd, but the apprenticeship program continued to have fewer and fewer benefits to the participants, some not receiving any deer at all at the end of their 5-year term.

The 20th century brought with it disease epidemics and further turmoil for the herding industry. Although more Inupiat were being granted ownership than before, non-Native families (most notably the Lomen family, in Nome) began taking over the industry. This led to the development of ownership cooperatives, where Inupiaq groups from multiple villages would have small herd holdings in order to compete with the larger monopolies on the industry.

Finally in 1937, Franklin Roosevelt signed the Reindeer Act, which prohibited the ownership of reindeer by non-Natives, effectively putting families like the Lomens out of business. Although the reindeer population declined sharply after this, the policy shift opened up new opportunities for the Inupiat.

Today, reindeer herds in western Alaska are managed by a handful of families on the Seward Peninsula, and can often be seen roving along the road system, in the preserve, or near the villages.