The Native Village of Afognak is a federally recognized Alutiiq Alaskan Native tribal entity, originally native to the island of Afognak.
Afognak coastline at Kazakof Bay 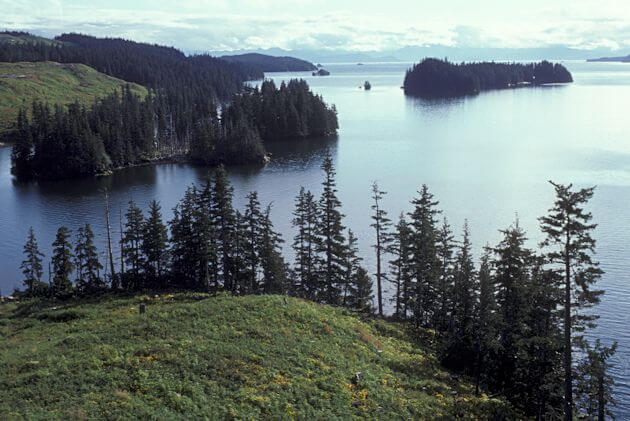 By Poppy Benson/U.S. Fish and Wildlife Service, via Wikimedia Commons

Language: Sugstun, one of the Eskimo languages, belonging to the Yup’ik branch. Also referred to as Sugcestun, Sugt’stun, or Sugtestun.

The Sugpiaq term for Aleut is Alutiiq. All three names (Alutiiq, Aleut, and Sugpiaq) are used now, according to personal preference. But they are not to be confused with the Aleuts, who live further to the southwest, including along the Aleutian Islands.

Subsistance: They traditionally lived a coastal lifestyle, subsisting primarily on ocean resources such as salmon, halibut, and whale, as well as rich land resources such as berries and land mammals. Subsistance activities remain an important food source today.

The dense spruce forests of Afognak are home to brown bears, Roosevelt elk and Sitka black-tailed deer. Many people visit the island recreationally for hunting and fishing.

The history of the Alutiiq goes back more than 7,500 years in the Kodiak Archipelago, but Russian occupation began in 1784 with the brutal massacre of a large number of Sugpiat at Refuge Rock (Awa’uq) just off the coast of Sitkalidak Island near the present-day village of Old Harbor (Nuniaq).The Russian-American Company then pressed many of the men of the islands in the area into service hunting otter.

This mistreatment and a smallpox epidemic in 1837 lead to increased protections from Russia and the imposition of a system of legislated villages, one of which was Afognak.

The village of Afognak was actually a combination of two former villages known simply as Russian Town and Aleut Town, formed through continual contact between the two groups.

Many Native traditions were cast aside in 1867 when Alaska was purchased by the United States.

During the period from the purchase of Alaska through its becoming a state in 1959 and until the earthquake in 1964, the quality of life was much lower for the Village of Afognak. Commercial fishing interfered with local sustenance and employment conditions were often far less than ideal.

The Good Friday Earthquake of 1964 destroyed the island and resulted in the relocation of surviving members of the village of Ag’waneq on the island of Afognak. A new village, Port Lions (named for the Lions Club who helped construct it), was constructed to house the tribe, but many moved on to Kodiak or elsewhere in the United States or Canada.

Today, there are a few small logging camps and fishing lodges on the island, and a community of Russian Old Believers at Aleneva. The economy is based on subsistence and logging. Transportation is provided by float plane from Kodiak to various areas around the island. The 2000 census reported a population of 169 persons living on the island.

In the early 1800s there were more than 60 Alutiiq villages in the Kodiak archipelago with an estimated population of 13,000 people. Today only about 4,000 Alutiiq people live in Alaska.