The Native Village of Dot Lake was founded by the late Doris (Billy) Charles in the mid 1940’s. Doris, believed to have been born around 1902, spent her younger years at Batzulnetas, a small native village, along the Copper River, within what is now known as
the Wrangell-St. Elias National Park and Preserve. 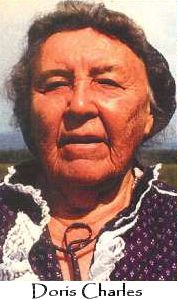 Doris was being raised by her elderly grandmother and recalled how she would accompany hunters into the mountains to hunt sheep, at times wadding through icy cold streams to obtain meat for the family. She also recalled how they would catch salmon from the Copper River, Tanada Creek and Tanada Lake.

Their diet consisted mostly of fish, sheep meat and berries. It was a very hard life in a very unfriendly environment. The long cold winters and short summers meant they had to work very hard just to live.

When Doris was a teenager, her grandmother moved her to Tanana Crossing, now known as Tanacross, so that she would not have to marry one of the old men in the village.

Doris lived with the missionary family at St. Timothy’s Church in Tanacross, where two years later, she met and was married to Peter Charles.

She lived in Tanacross for a period of time, living a subsistence lifestyle with her husband and children. At times, the family would move to a fish camp or hunting camp so as to gather food supplies.

Doris was very subsistence orientated, trapping during the winter, with her dog team, muskrat hunting in the spring; picking berries, gathering roots, drying salmon and white fish during the summer; and helping her husband hunt moose and caribou in the fall.

She would dry some of the meat and tan the hides into leather to make clothing and foot wear for her family. Doris was also very skilled at beading, she was especially known for her beaded eagle and sheep.

The family often traveled on the Tanana River and would camp for long periods of time while gathering their subsistence foods. A few of the areas used during these times were known as Paul’s Cabin, Bear Creek, and what is now known as Dot Lake.

In the mid 1940’s, Doris relocated her family to Dot Lake, where she continued her subsistence lifestyle, teaching her children the traditional and cultural values of Athabascan Indians of Interior Alaska.

Doris continued to live in Dot Lake until forced to relocate to Fairbanks because of illness. Doris passed away at the Pioneer’s Home in Fairbanks Alaska on March 25th, 2002. Doris is be missed by all who knew her, as indicated in the following article, written by her son-in law, William (Bill) Miller, and submitted to the Fairbanks News Miner:

FAREWELL TO A MATRIARCH:

Dear Editor;
On March 30th, 2002, the Native Village of Dot Lake laid to rest its beloved matriarch, Doris Billy Charles. For more than fifty of her ninety plus years, Doris had been the traditional and cultural leader of this small Alaskan Native Tribe.

Doris passed away on March 25th, 2002, leaving a void that can never be filled. This was a great loss to the family, the Native Village of Dot Lake and the Upper Tanana Region.

It was a loss to the concept and idea of the true Alaskan Native tradition and culture of sharing and loving.

Doris spent her entire life in the true fashion of giving and sharing. She gave unselfishly of herself and her knowledge to help improve the lives and wellbeing of her family and her people. Until becoming too ill to continue, she fought not only for her rights, but for the rights of all Alaskan Natives.

While she had no formal education, Doris was always willing to share her wealth of traditional and cultural knowledge with anyone that wanted to learn. We all know that Doris is now in a better place, with no pain, worries or troubles, but we will miss her and her guiding light.

We can only hope and pray that someday, through the grace of God, we can again be with her and listen to her wonderful stories of days gone by. The Charles family, the Dot Lake Village Council, and the Native Village of Dot Lake take this opportunity to thank all those that came to comfort, help and share during this time of deep sorrow.

I met Doris in August 1960. I was a young, naïve G.I. I had no knowledge of Alaskan Native tradition or culture. I had hunted and fished for sport, but knew nothing of the struggles and hardships endured by the indigenous peoples of Alaska in their attempts to survive.

Aside from being the matriarch of Dot Lake, Doris had been my mentor for over 40 years. She taught me the meanings of many of the traditional and cultural practices of her people. The wealth of knowledge possessed by Doris was unequaled.

I feel very rich and blessed today for having had the honor of knowing and being able to share the life of this outstanding woman that I have been able to call my mother-in-law for forty-one years.

I would like to extend my sincere thanks to the many people that came to pay tribute to this most outstanding woman. Their presence helped ease the pain we all felt.
THE CHARLES FAMILY