Noorvik Native Community is 15 feet above sea level in a transitional climate zone characterized by long, cold winters and cool summers. Ninety-five percent of Noorvik residents are Iñupiat, with ancestral ties to the land. 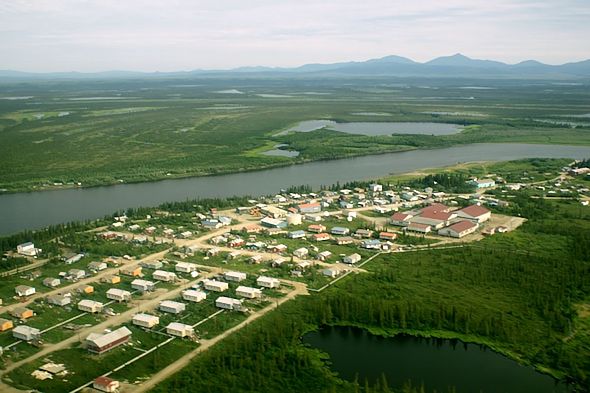 Language: Iñupiaq is the indigenous language of the region, spoken by many older residents, with programs underway to promote its learning and use by children.

Traditional Name / Traditional Meaning: Nuurvik in Inupiaq, meaning “a place that is moved to.”

Noorvik is located on the south bank of the Nazuruk Channel of the Kobuk River, about 30 miles downriver from the southern border of 1.7 million acre Kobuk Valley National Park. Noorvik is 33 miles northeast of Selawik and 42 air miles southwest of Kotzebue on the opposite side of Hotham Inlet, also known as Kobuk Lake.

Noorvik was settled in the early 1900s, primarily by people from Deering, a village 75 miles away, across the Kotzebue Sound and Aksik, a village located a short distance upriver.

The Noorvik post office was established in 1937. The city government was incorporated in 1964.

Although Noorvik’s population dropped between 1920 through the1930s, the number of residents has been steadily increasing. As of the 2000 census, there were 634 people, 136 households, and 113 families residing in Noorvik. That marked a 14 percent increase from 1990 estimated population of 543 residents.

Ninety-five percent of Noorvik residents are Iñupiat, with ancestral
ties to the land. For thousands of years, the Iñupiat lived a traditional subsistence
lifestyle. Today, many people still subsist but also participate in the modern American
economy.

Noorvik is 15 feet above sea level in a transitional climate zone characterized by long, cold winters and cool summers. The average high temperature in the summer is 59 degrees Fahrenheit. The average winter low is nine degrees below zero. Temperatures of -45 degrees have been
recorded.

Noorvik averages 106 precipitation days per year, resulting in nearly 10 inches of annual rainfall and more than 50 inches of snow.

Temperature variations between night and day are limited year-round, with an average variation of 10 degrees during the summer and 13
degrees in winter. Prevailing winds come from the west in the summer and the northeast in winter, averaging 13 knots (about 15mph).

Primary modes of transportation to and from Noorvik are barge, plane, small boat and snow machine. At present, there are no roads linking
Noorvik to other communities.

Air—The Robert (Bob) Curtis Memorial Airport is a state-owned public use airport located one mile north of Noorvik’s central business district.
The airport has a single gravel-surface runway that has 4,000 usable feet long and 150 feet wide, with runway lights and navigational aids. Maintained by the Alaska Department of Transportation, the airport is open year-round.

Land—Roads extend throughout the village and a short distance out of town to the airstrip, cemetery, waterfront and solid waste disposal site, including a 7.2 mile road to the gravel resource pit. Scores of trails, concentrated along nearby streams, provide access to hunting and fishing grounds. Villagers commonly travel by all-terrain vehicle and snow machine.

The Noorvik Water Department pumps water from the Kobuk River to a treatment facility where the water is fi ltered, chlorinated and
fluoridated. Water is distributed throughout Noorvik using a pressurized circulation system.

Noorvik Aqqaluk High/Elementary School provides education for about 200 elementary, middle and high school students per year. Built in 1974, the Northwest Arctic Borough School District facility has been updated to a modern facility with Internet access and computers in every classroom.

Post-secondary education is available in Noorvik via online classes provided by Chukchi Campus, a rural division of the University of Alaska.